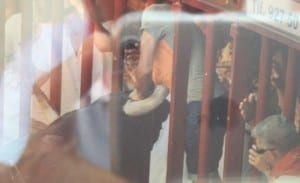 THE shooting of a bull in broad daylight has sparked investigations from Spanish police.

The video showing the last breath of the bull, named Guapeton (‘Handsome’), went viral on Youtube and Facebook after festival-goer Nacho Gomez posted it.

The day before, the bull had gored 43-year-old father-of-one Martin Caballero who died of his injuries in Coria Hospital in Caceres province.

Animal rights activists are in uproar about the violent act which saw the 540kg bull teased and then killed at the San Juan de Coria festival in Caceres.

The incident may cause a fine of €30,000 to the town hall for the danger caused to bystanders.

“This bull didn’t choose to be a captive or to be executed in front of a cheering crowd of young, unthinking men simply for defending himself against human tormentors,” said animal rights group PETA UK director Mimi Bekechi.

“Why is it a surprise to anyone that this animal would become so scared and confused by human harassment that he would use all he has in his own defence – his horns – to try to save his own life?”

It is common for a bull to die if it has killed a human, but not for this to happn in the street.

The killing appeared to be carried out with no security measures in a packed crowd of Coria’s Plaza de Espana.