THE prime suspect in the murder of two women in Cuenca has been detained by Romanian police.

Sergio Morate is thought to have killed his ex-girlfriend Marina Okarynska, 26, and her friend Laura del Hoyo, 24.

Morate, who previously served jail time for the kidnapping and sexual assault of an ex-girlfriend, was arrested along with two Romanian companions in western Romania.

Okarynska and del Hoyo were last seen on August 6, when they went to Morate’s house to retrieve some of Okarynska’s belongings. The two were reported missing the following day.

Autopsy results reveal that del Hoyo was strangled to death before her body was dumped alongside Okarynska’s on a riverbank near Palomera, Morate’s hometown in Castilla-La Mancha.

A passing cyclist spotted the bodies on August 12 and alerted police.

The women’s bodies were covered with quicklime, which resulted in burns to their skin, in an apparent attempt to speed up decomposition.

Authorities have not yet released results of Okarynska’s autopsy, though they confirmed she was also a homicide victim. 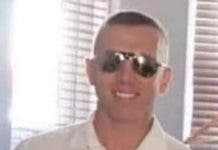