PLANS to build a Lord of the Rings theme park have been put on hold due to government spending cuts.

The project, which was set to be built in the hills near Rincon de la Victoria, has been suspended, as the government doesn’t believe it is viable.

The brakes have now been slammed on the exciting scheme, as well as a €3.8 million indoor swimming pool, after PSOE mayor Encarnacion Anaya expressed financial doubts.

“We can’t be sure of the financial viability of either project, especially not the Tolkien park,” said Anaya. “If anything the swimming pool is our first priority.”

The town’s four-party coalition is currently going through a ‘difficult situation’ of clearing €73.4 million of debt.

Both projects were inherited from the previous PP government led by Francisco Salado who billed the park as a ‘first class tourist attraction’.

But Warner Brothers have already raised copyright issues over the La Comarca project, which was originally meant to have opened by the end of this year. 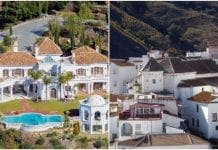