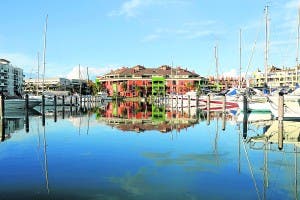 “THE difference between Marbella and Sotogrande is that people go to Marbella to be seen,” says Swiss expat Madeline Gurtner, with a knowing smile.

“Sotogrande is for people who don’t want to be seen, who want to be private and crave the tranquillity.”

An enigmatic place, the leafy residential enclave, often known as ‘Soto’, is perfectly summed up by the boss of Pedro Antiguedades, a veritable Aladdin’s Cave of antiques just up the alluring Guadiaro valley.

“You don’t have to have a flashy car to come here… although many do,” she continues. “It just has a completely different feel to anywhere else on this coastline.”

Sometimes described as Spain’s ‘millionaire’s playground’, it was initially purpose-built for a cosmopolitan, moneyed crowd with the added bonuses of 24-hour security, designer boutiques and ritzy restaurants.

Even the public toilets are stylish! (Apparently you really can judge a place on its loos, I am told). 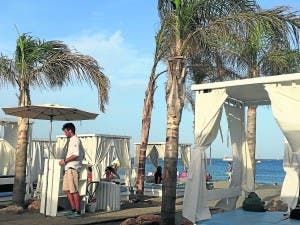 Sandwiched like a caviar filling between the Costa del Sol and Costa de la Luz, not to mention Gibraltar and Malaga airports, what sets it apart is its overwhelming sense of discretion.

In Sotogrande, one speaks in sotto voce – like the old ‘Sch – Schweppes’ tonic ads, only on this more cosmopolitan stretch of coastline it’s more likely to be Nordic Mist. Just take a visit to Chambao, the hip beach chiringuito, on a Wednesday night, and you will get my meaning.

To be fair, the resort has had an air of exclusivity ever since it was developed in 1962 by Joseph McMicking, after the multi millionaire fell in love with the location on a chance trip to Spain with his wife, gifted with the compliments of Swissair.

Since then, a Who’s Who of royals and aristocrats have bought homes or holidayed here.

And come summer time, you need to keep your spotter goggles on with everyone from princes William and Harry to Andrew and Fergie, the Duchess of York, plus princesses Eugenie and Beatrice, frequently visiting around polo time (more of which later).

Then there are the A-list singers and actors, with Rod Stewart, Mariah Carey, and Genesis’ Mike Rutherford, adding a veritable sprinkling of stardust to the mix.

The most recent arrival is BBC TV presenter Nick Knowles, writer wife Jessica and their one-year-old baby Eddie, who moved in on a friend’s recommendation when Nick had some health problems and needed to slow down the pace, earlier this year.

The DIY SOS host commutes backwards and forwards to the UK, by all accounts loving his new laid-back lifestyle in the enclave.

Most people hear about Sotogrande through the grapevine – but try and find it in travel guides and you’d think the enclave doesn’t exist. Neither Fodors, the Rough Guide nor

Lonely Planet list it in their books on Spain and little is written even in guides to Andalucia.

However, visit the resort in August when it’s jam-packed with hunky polo players and paparazzi poking their telephoto lenses around Santa Maria Polo Club’s VIP terraces, and it’s not so incognito. 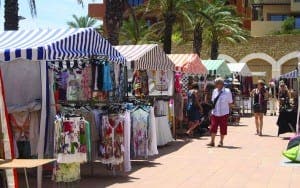 Indeed, you will find articles popping up in national newspapers both here in Spain and abroad, and Hello magazine, and the likes, will have at the least a handful of photos most issues.

The polo – with its pop-up shopping village and Grey Goose vodka bar parties – is certainly the big attraction for 43-year-old Adam Richardson, a car dealer from Leicestershire, who owns an apartment in the port and hasn’t missed a chukka in 10 years.

“It’s paradise, I love it here, but whatever you do, don’t tell everyone!” he laughs – only half joking.

Unsurprisingly, Sotogrande is imagined by outsiders to be a world of privilege, where Russian oligarchs sip Pimms with British debutants.

And yes the Russians do arrive, with one homeowner renting his enormous villa out to a family this summer, describing them as the ‘perfect’ clients, ‘clean, quiet and respectful’.

“I’m not really sure what they thought of the place or what they did,” added the British banker owner. “Their only major request was proper TV.”

But in reality it is not Qatari princes or flashy celebs you find treading the immaculately-paved pathways but low-key, northern Europeans and plenty of Madrid families on holiday.

And although the big draw, polo, has a reputation as an elitist sport it’s free for all (except on Cup Final days).

In the marina, a well-heeled British couple with two young teenage girls are on a day-trip from nearby Gaucin. Robert and Becky are drawn by the polo but distracted by the pristine boutiques where sumptuous fabrics adorn windows, daring you to decorate your imaginary dream pad.

“It reminds me of Dubai,” says Robert as daughter Martha beetles off to salivate over a pair of sequinned espadrilles. “It really couldn’t be more different to Gaucin.”

He’s not wrong. The parallels between Sotogrande and the pristine uniformity of Dubai, with a dash of Beverly Hills, are clear to see.

Elegant apartments and multicoloured townhouses cluster around the marina while yachts, Audis and quadbikes pass by in harmonious, photogenic scenes reminiscent of a film set.

But contrary to stereotypes, many of the people who live here are ‘normal’ and pretty down to earth. 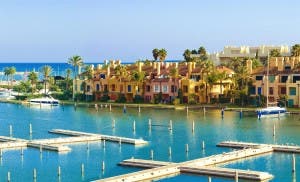 “You don’t have to be flashy to enjoy Sotogrande, in fact many of the residents wouldn’t be seen dead in Marbella,” says Ben Bateman of Holmes Sotogrande.

His view is echoed by London-based PR consultant Yasmin Sethna, who divides her time between Sotogrande and London.

“I love the fact that it isn’t full of overpriced restaurants. You can eat well and inexpensively in Sotogrande and nearby in Torreguadiaro,” she promises.

“It’s a beautifully-kept resort, surrounded by fantastic countryside and well-placed for access to Gibraltar, Marbella, Estepona and Tarifa… and now you’ve got the Trocadero beach club for a touch of glamour.”

In fact, behind its façade of exclusivity, Sotogrande welcomes its visitors almost indiscriminately, as illustrated by the bustling Mercado de Levante flea market that springs up under candy-striped awnings along the port’s quayside on Wednesday and Thursday evenings and Sunday mornings.

And, don’t miss this year’s new food truck dining concept where you can feast on street food out of retro caravans (at the polo as well as the port).

And, perhaps best of all, there are no obvious signs of ‘lads, ladettes and typical Brits abroad’ behaviour.

Waiter Mario at the port’s La Marina bar speaks highly of the British customers. He says they’re ‘less pushy, less demanding’ than some of their European neighbours and generally very well behaved.

In fact, you’re just as likely to hear Spanish, French, German, Russian and Swedish being spoken (sotto voce, of course) in polyglot Sotogrande where it’s not all about the British.

And is it any wonder, with two polo clubs, racquet and yacht clubs, a swanky equestrian centre, and five championship golf-courses (including the illustrious Valderrama of Ryder Cup fame), all on the doorstep?

“There’s an amazing mix of people here,” says economist Valero, 62, from Barcelona.
“So many nationalities, but almost everyone speaks English so people coexist well – and the common love of polo and golf brings people together too.”

The Californian climate, the sense of space and the ease of a purpose-built complex leave me feeling disorientated in the most delicious way possible, but I take to the road to see just how far you have to go for some authentic Spanish grub.
The answer? Not far.

While Torreguadiaro is less glamorous that its big sister Soto, the Transmallo de Agustin restaurant offers delicious seafood, charming service and stunning sea views. And then you have amazing Thai restaurant La Casita in Alcaidesa.

Before long I’m on the A2102, a rural track winding through unspoilt countryside, crossing the handsome bridge at Venta Nueva and checking out Soto’s neighbouring villages of Guadiaro and Pueblo Nuevo.

I pass through Secadero, where I am sucked in by the time capsule of aforementioned Pedro’s antiques shop before arriving in San Martin del Tesorillo.

This quintessential Spanish village is home to some 5,500 residents, including more than a few Romanians, judging by the number clustered around their bar Terraza, who invite me in with wide, toothy smiles.

There’s something ironic about the bar’s homely murals, featuring the Eiffel Tower and emblazoned with the slogans ‘I could fly to Paris’ and ‘London – city of dreams’.

How many people sweating in offices in either capital wouldn’t dream of being here, enjoying a cana overlooking the vineyards in this idyllic spot?

“If you don’t have time for a drink, come back soon. We’d love to see you around and you’re always welcome,” says Aura, who is standing in for a friend.

I drive back through Sotogrande on my way home, admiring its natural beauty and reflecting on the welcome I’ve met from such a cross-section of society.

Sure, some people in Sotogrande are ‘grand’ in the wealthy, well-connected sense, but no one’s too posh to pass the time of day.

Yet it still has the enigmatic quality of privacy and seclusion first referenced by Madeline at her antiques emporium.

Maybe its highfalutin reputation is an act of self-preservation, Sotogrande’s ingenious way of remaining below the radar.

So shhh. Speak sotto voce in Sotogrande. And whatever you do, keep it a secret. 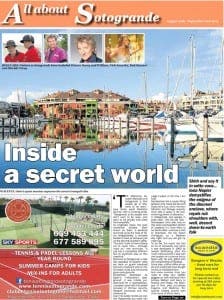 Spain’s Sotogrande is centre of the polo world this summer