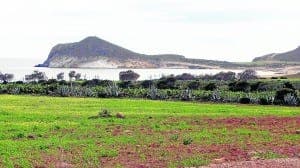 GROWING up, there was one place in Europe that I knew I could always get away from it all and enjoy pretty much guaranteed sun.

Cabo de Gata in Almeria is also luckily one of Spain’s last remaining coastal regions not yet sacrificed to developers and consumerism.

Coupling hauntingly beautiful landscapes with stunning unspoilt beaches, the protected region has the most relaxed vibe…even in August.

Conjuring up a true sense of wilderness, it is no surprise that many a Western film was shot here, including The Good, the Bad and the Ugly and Once Upon A Time in the West.

The landscape is barren and dry, like the deserts of Arizona and the West of America and, of course, back then filming was far cheaper than in Hollywood.

And then you have the amazing backdrop and setting that inspired Garcia Lorca’s tragedy Blood Wedding, at the now-ruined atmospheric Cortijo de los Frailes, a must visit for any culture fan.

Rolling hills of elephant grass, pock-marked with lines of agave and low-rise, flat-roofed white farmhouses, this is a photographer or film-maker’s dream.

The walks are wonderful, either inland or along the undulating coastline, and the mix of restaurants and hotels is excellent.

But most of you are probably interested in the beaches, and there are few places in the world that can compete with Playa de los Genoveses, Playa de los Muertos, or La Cala de

San Pedro, which can only be reached via a stiff hour-long stroll from Las Negras… or a boat!

While Genoveses is part naturist on one side, it is the perfect family beach, as long as the kids don’t mind a short walk across the dunes, that is apart from in summer when there are some special arrangements to get there.

For those looking for something more convenient, hole up in Agua Amarga, often thought to be one of Spain’s most exclusive resorts, albeit in the most low-key sort of way.

A stopping-off point for celebrities including footballer Iker Casillas and girlfriend Sara Carbanero, the Swedish royal family and, even, it is claimed, King Felipe and wife Leticia last summer.

It was here where the film Sexy Beast was shot and where Spain’s leading captains of industry come to unwind.

Out of season you can literally have the beach to yourself, but even in August there is more than enough space to lay your towel on the beach.

But what nailed the area for me was when I once interviewed former Clash lead singer Joe Strummer for the Daily Mail, who told me he had a home in the main resort of San Jose and visited frequently.

Loving the edgy, offbeat feel of the town, which has grown quite substantially over the last decade but still has its charm, he was well known there.

As the owner of local restaurant La Gallineta explained: “Joe typified the kind of visitors we get to the region. He was fun, thoughtful and intelligent.

“He spoke Spanish and would always turn up at my restaurant shouting for a mojito with a big smile on his face.

“We gave him the nickname ‘Mojito Joe’ and were all devastated when he passed away so young.”

One thing is for sure, there is no way Joe went Straight to Hell, to coin the name of a film he starred in and shot in Cabo de Gata in the 1980s.

Here, the Olive Press picks out its nine essential keys to enjoy the Cabo: 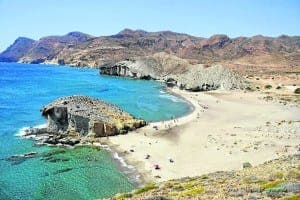 You are truly spoilt for choice for beaches, whether you want the simple spots, such as Agua Amarga, which sits in a lovely cove by the town, or one of the wilder ones, which you will have to walk to. Pick of the bunch are the pair of Monsul and Genoveses (above), near San Jose, or Los Muertos, which gets packed in summer and hard to park, so you will need to arrive early. Playazo is great for families, while Cala del Plomo and Cala de Enmedio are pretty easy to reach by a walk from Agua Amarga (trainers recommended) and likely to be fairly quiet, even in August. 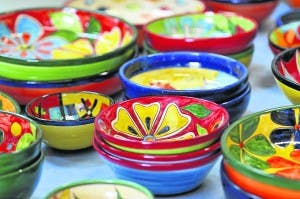 Looking for pottery, some of the most original and colourful to be bought in Spain comes from charming town Nijar (the nerve centre of the park) inland in the mountains. Well worth a morning’s drive, the place has a history of ceramics and there are a number of studios to visit and some very reasonable prices for the wares.

A brilliant way to combine the unique desert landscape of the park and a beach is a stroll to the famous ‘hippy beach’ of San Pedro. It takes around an hour each way, through breathtaking scenery and the arrival down a narrow path to the ancient ruined castle will be a massive plus point for kids. Once there you will come across the long-time colony of new age travellers, who offer refreshments and snacks, not to mention the obligatory beads and jewellery for sale. Expect a fair few naturists!
It can be fairly hot so set off early and if you don’t fancy the walk back you can always get a boat taxi for €6. 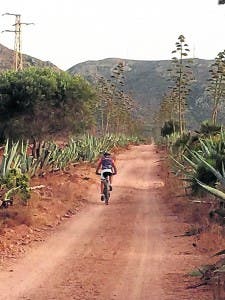 A great thing to do with kids is to get a boat from Las Negras to the deserted beach of San Pedro, which is just €6 there and back in summer. You might also want to hire a bike (many hotels provide them free of charge) and head off into the stunning interior, such as the amazing track that heads from Rodalquilar to the stunning Cortijo el Fraile. There is also a fantastic via verde (green route) that is perfect for enthusiastic cyclists to take to and from the charming town of Lucainena de los Torres inland.

The old iron and gold mines in and around Rodalquilar are a sight to behold. The old mining facilities just outside of the village are interesting, and you can even visit the mines themselves. There are hundreds of mines, tunnels and evacuation sites, which can be explored by tours and even on your own if you are brave. You find them driving above Rodalquilar on a rough track, which is passable if you are patient and brave. Eventually you will come to the main mining area, which is fascinating.

It was way back in the 1960s that a series of American film producers and, oddly, Italian directors, principally Sergio Leone, saw the potential of using Cabo de Gata and its inland environs for, so-called, ‘Spaghetti Westerns’.  Loads were filmed down here, including A Fistful of Dollars and For a Few Dollars More, bringing a fabulous input of money to an extremely poor part of Spain at the time. Many of the original locations are easy to find, while some of the sets have been preserved at a variety of film studios inland, near Tabernas, the best being the Oasys Mini Hollywood, which kids will love. 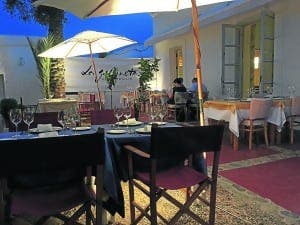 One of the true delights of the area is the number of good places to eat in every village, with the highlights being around Las Negras, Rodalquilar and Agua Amarga. In Agua Amarga try La Villa, where American Lissa Griffith has a fabulous mix of international dishes, as well as the new pizzeria Carpanta, which also serves up a fabulous tuna carpaccio, not to mention decent cocktails at night. In El Pozo del Fraile look out for the amazing La Gallineta, my pick of the park, set in a charming garden and with some breathtakingly fresh and adventurous dishes (a pudding, above). Finally you might even get to try the food of former Spain Masterchef winner Juan Manuel Sanchez at the hotel Real La Joya, if you can get a table. Best bet is to stay there!

Well, the obvious place if you are looking for a good restaurant to go with your garret is the Real La Joya in Agua Amarga. This stunning suites hotel, which has put up a number of celebrities, sits in a charming spot above the town with amazing views and an overwhelming sense of peace. In the town itself you might also try Mikasa, or outside the relaxing Cortijo Los Malenos, part of the Relais de Silence chain. In San Jose, Cortijo el Sotillo is a long-time favourite, while inland, in Lucainena de las Torres a great value authentic spot is the wild country farmhouse El Saltador. 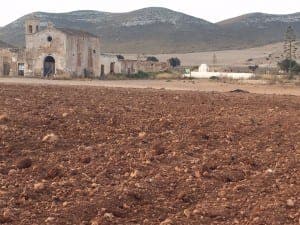 Hauntingly atmospheric Cortijo del Fraile sits in a hidden valley between Los Albaricoques and Rodalquilar and was the setting for Garcia Lorca’s Blood Wedding, one of Spain’s most famous plays and films. Despite years of hollow promises (and protected BIC status), the ancient cortijo and chapel is sadly crumbling into the earth from which it was built. It was here that the infamous ‘crimen de Nijar’ tragedy took place, on which the Lorca play was based.