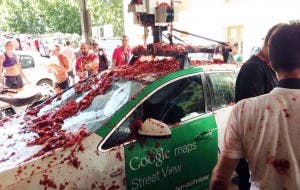 THOUSANDS of half-naked revellers pelted a Google Street View car with tomatoes as it drove through the world-famous Tomatina festival.

Filming had be stopped in the Valencia city of Bunol after the car’s cameras were knocked off during the attack.

Bodywork was dented, while mirrors and windscreen wipers were ripped off as tomato-sodden festival-goers mounted the vehicle during the 70th anniversary of the festival.

A Google spokesman said the company was disappointed that the filming had to be stopped.

“We are sorry our intention to celebrate the 70th anniversary of the Tomatina has been lost because of the high spirits of a group of people,” he said.

A whopping 170 tonnes of tomatoes were launched through the skies during the iconic festival attending by over 20,000 people.

Cristina Hodgson - 23 Sep, 2021 @ 08:45
A CLOUD of sulfur dioxide from the La Palma volcano is expected to hit mainland Spain today and may fall in the form of...