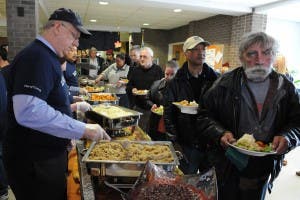 Volunteers in their droves came to the rescue of people struggling to put food on the table.

Spain’s food refuges were full to bursting in 2014, with 11.7% more mouths to feed than in 2012 according to INE’s recent statistics.

Spain’s capacity for providing beds is 16,486 in the summer months and last year saw an average occupation of 83.1%.