SPAIN’S ten most popular chefs on social media have been revealed – but the Spanish owners of the World’s Best Restaurant Award are not on the list.

His sister Eva comes in second with 653,000 fans, with the siblings’ television profile ensuring they a vast army of followers.

However, the Roca brothers, who own El Celler de Can Roca, are not on the list, with their world-renowned Catalan restaurant keeping a low social media profile.

Madrid maestro Alberto Chicote is in third place with his blend of traditional recipes and innovative styles earning him 584,000 fans. 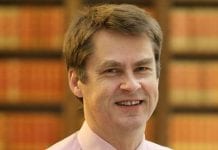