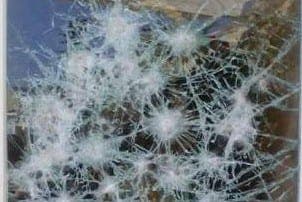 A MUSLIM expat stands accused of ‘religious hatred’ after stoning a Christian artefact.

The 27-year-old Moroccan – named only as AB – remains in police custody after causing thousands of euros worth of damage to the shrine of Virgen del Carmen in Rincon de la Victoria.

After repeatedly smashing the glass encasing the shrine with a heavy stone, the man allegedly shouted ‘Allah is great’ before police arrested him.