THERE’S nothing worse for a football team than playing in front of an empty stadium. 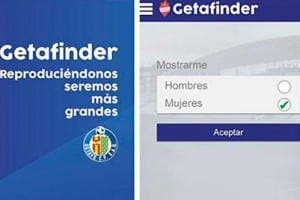 So La Liga team Getafe have launched a dating app in the hope that their fans will reproduce and multiply in number.

‘Getafinder’ works much like popular dating app Tinder, with users swiping left (no) or right (yes) on various profiles, with the aim to be matched with someone who swipes right back.

But the app only works within the area surrounding their stadium, the Coliseum Alfonso Perez, in the south of Madrid

The app’s description states: “Getafe is one of the teams with the lowest number of supporters in La Liga.

“What can we do about it? It’s very simple. Reproduce ourselves.”

With giants Real Madrid and Atletico Madrid drawing football fans to the capital, Getafe have been lucky to fill half of their seats for home games this season.

They currently lie 14th in the league.