THE latest jobless figures may put Prime Minister Mariano Rajoy’s administration, which faces a tough battle on December 20 to retain its majority in Congress, in a positive light. 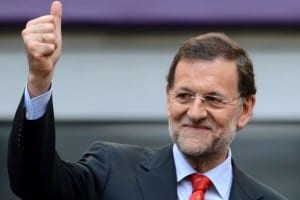 Nonetheless, the numbers don’t provide any irrefutable argument that Spain’s economy is heading for better times.

The government’s statistics office reported last week that unemployment fell below the 5 million mark for the first time in five years.

Just some 4.85 million of the active population are out of work, which puts the country’s official jobless rate at 21.18%. That is still one of the biggest figures in Europe.

This past weekend in Alicante, a buoyant Rajoy attributed the lower numbers for the third-quarter to higher tourism and rigid labour policies he introduced after he came to office at the end of 2011.

The Popular Party (PP) has acknowledged that it may lose seats in both chambers to the up-and-rising conservative grouping Ciudadanos, which is gaining strength in many parts of Spain.

The only way for the PP to stay in government would be through the formation of a coalition with Ciudadanos, but this wouldn’t guarantee that Rajoy would remain as prime minister.

Ciudadanos leader Albert Rivera has said that the prime minister’s office would no doubt be a bargaining chip in any partnership negotiations.

On another front, the Socialists, who lost to Rajoy after two tumultuous terms under Prime Minister José Luis Rodríguez Zapatero, have also seen their political fortunes rise thanks to the fears and uncertainty of radical change being offered by the left-leaning Podemos party.

Socialist leader Pedro Sánchez has proposed altering some of the PP government’s policies while adopting similar, but less radical, positions Podemos is proposing.

The Socialists are nearly neck-and-neck with the PP, according to recent polls.

Ruling party strategists have now advised Rajoy to focus his discourse on his “experience” over these three political novices, and convince voters that there will be a continuation of “economic stability,” as the campaign is formally set to begin.

The problem with this game plan is that most Spaniards have not experienced any improvements in their household finances in many years.