A PICTURESQUE Gaucin eatery that appeared in Gordon Ramsay’s Costa del Sol Kitchen Nightmares has closed its doors for the last time.

Already failing after only eight weeks in business, La Granada Divino was massively overhauled when the kitchen giant descended for a gruelling week in October 2014 to transform the restaurant into a potential winner.

Following his visit, owners Milan and Gina Varmuza were taking  €7,090 a week, and the restaurant built up a reputation as one of Gaucin’s top food spots.

Olive Press publisher and food critic Jon Clarke was even drafted into sample the culinary delights and give them his stamp of approval. 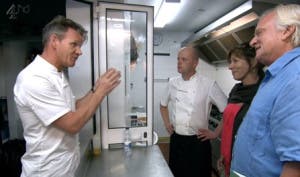 But the effects of astronomical summer rents ‘and lots of other reasons’ forced Milan and Gina to throw in the towel last month and retire.

“It’s got nothing to do with all the Gordon and the show,” Milan told the Olive Press.

“We got a huge amount of publicity due to the show – and our Facebook page continues to do so – but we were too busy to continue this.”

He continued: “We are selling absolutely everything from the complete professional kitchen to light fittings.”

It is hoped that the restaurant, tucked away in the town’s backstreets, will reopen under different ownership in the future.