THERE is not much Gerry Rylance does not know about English… and the same could be said for food and wine, particularly sherry. 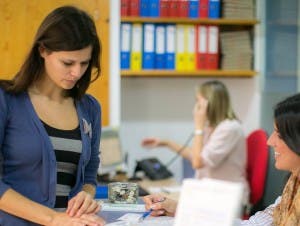 Having worked as an English teacher in Jerez for over three decades he is in an unrivalled position to explain the countless complexities of the sherry industry, not to mention recommend a dish for just about every decent ‘tabanco’ in the city.

And he has certainly put his experience to good use, now running one of Andalucia’s top language academies, counting on leading companies, politicians and top UK schools, Eton and Harrow as regular clients.

Opening a new floor with five more classrooms, it is capitalising on being the official Cambridge English examiner for Cadiz province, as well as being only one of three so-called ‘Platinum’ centres in Andalucia.

Seen as the gold-standard in language awards, it is also now on the official Cervantes Institute list of leading centres in Spain.

“We had to keep up with demand and will also be adding a library and kitchen for students,” explains Rylance, 59, who is responsible for examining 10,000 Cambridge English students a year in the Cadiz province.

The father-of-three, luckily now counts on a reliable team, including his daughter Carlota as his deputy, to help him keep things on track.

The job includes keeping big groups of UK students, from schools including Eton and Harrow, in check. “We get mostly the 14 to 15-year-olds and they always have fun, but in a safe place to be,” he says.

But apart from many school groups, his academy has countless private and group classes, tailored to each individuals needs and level.

Many of the courses involve a week or two staying in the wonderful city, with prices from as little as 310 euros a week.

Having arrived in Jerez in 1980, Rylance quickly settled into the pace of life, enjoying the city’s unique culture and history.

A huge fan of its famous sherries, two years ago for the academy’s 30th anniversary he commissioned an Oloroso blended from ten different vintages since 1913.

“It was a unique blend that could never be repeated again with the same characteristics.

“I sent over a dozen bottles to Cambridge University and one will be included in the centenary time capsule.”

He continues: “We have long had a close relationship with the wineries and we even do a special course focusing on the world of sherry, including visits to the wineries.”