THE world’s tallest cross soars 150 metres above the pine forests and granite mountains of Sierra de Guadarrama, 30 miles from Madrid.

It’s an  idyllic location stained by history and the atrocities of war.

For here, too, lie the remains of some 40,000 civilians and soldiers, many of them Republicans executed by Franco’s cruel regime, transferred to the site on his orders and buried beneath the valley floor.

In a final bitter irony, they are interred alongside their hated enemy.

And, 40 years after Franco’s death, Spain is yet to agree on what to do with this most visible symbol of his dictatorship.

Franco claimed it was intended only as a ‘national act of atonement’ honouring the civil war fallen. But many regard it as a monument to an assassin.

And it has also been compared to a Nazi concentration camp for the use of prisoners of war in its construction.

The site, and its monastery of 23 Benedectine monks is managed by Spain’s National Heritage, the Patrimonio Nacional. According to the monks’ registry, the bodies of at least 33,847 Nationalists and Republicans from the Civil War are buried here.

Every November 20, the anniversary of Franco and Primo de Rivera’s deaths is marked with a mass at Valle de los Caidos’ cavernous Benedictine Abbey. Part-Falangist rally complete with stiff-armed fascist salutes, it is a remembrance ceremony held in a Catholic church to a dictator who, according to historian Paul Preston, executed 120-150,000 Republicans, burying them in hundreds of unmarked graves across Spain.

“The rising against the Republic was a terrible crime. Spain is behaving disgracefully. As a Spanish citizen, I have a moral duty to speak out.

“No country should leave 120,000 people in unmarked graves. The right wing here is not facing up at all to its own holocaust.”

Despite these associations, Valle de los Caidos’ popularity with tourists endures. Figures supplied by Patrimonio Nacional show 240,837 people visited in 2014, while in 2013 it was their third most visited site in Spain. The crypt, declared a basilica by Pope John XXlll in 1960, is larger than St. Peter’s Basilica in Rome.

Commissioned by Franco to equal ‘the grandeur of the monuments of old, which defy time and forgetfulness’, on 1 April 1940, the dictator detonated the first blast of dynamite as excavation began. 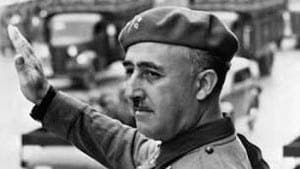 For the next 18 years, thousands of Republican prisoners – and more right-wing volunteers – were forced to dig their conqueror’s tomb and adjacent monastery from the bowels of these hills.

Nicolas Sanchez-Albornoz was one of these prisoners. In 1948, the 20-year-old Republican student was sentenced to eight years hard labour at Valle de los Caidos, before managing to escape.

“I think the first thing to do is get rid of the symbolism, which is the fact Franco and Primo de Rivera are buried there,” the 89-year-old told the Olive Press.

“You have to move their bodies to another place. Get rid of the civil war symbolism and the monastery, which is there to provide for the soul of Franco.

“I am really angry with all the governments that since 1976 that have done very little to solve that problem.”

Ahead of December’s general election, PSOE leader Pedro Sanchez has pledged to remove both bodies and to ‘urgently apply a new character to Valle de Los Caidos’.

But for Jaime Alonso, Vice-President of the Fundacion Nacional Francisco Franco, Valle de los Caidos is a unifying memorial.

Since 1976 his organisation has dedicated itself to preserving Franco’s memory. He sees no contradiction in Republicans lying buried alongside their enemy.

“Franco is the most important man in the history of Spain since the Catholic kings,” he told the Olive Press.

“Valle de los Caidos is a monument created for reconciliation, a monument that for any Catholic is a sacred place where the bodies of the fallen lie.

“After death, enemies don’t exist. Enemies are before, in life. In Spain, years later, there are adversaries, or people who think one way or another.

“The enemies are the sons, or grandsons, of the fallen that continue to look for enemies.”

Emilio Silva Barrera, journalist and co-founder of the Asociación para Recuperación de Memoria Histórica, is one of those grandsons. Since 2000, his organisation has helped families exhume the bodies of loved ones buried in mass graves during the civil war.

His grandfather, Emilio Silva Faba, was among the more than 1,300 bodies they have recovered. He was executed in Leon by Franco’s soldiers along with 12 other Republicans in October 1936. Barrera located and recovered his body 74 years later.

“There are thousands of Republicans buried at Valle de los Caidos,” he told the Olive Press.

“It is perhaps the only monument in the EU where a dictator is buried in a tomb paid for by his victims.

“For me, that’s very symbolic of the relationship that those in power in Spain have with Francoism. For years I’ve paid for Franco’s tomb. This would be unthinkable in Germany, Italy or Portugal or even in Spain with victims of terrorism.”

This November 22, on a bitingly cold Madrid Sunday, a 1,000-strong protest of relatives of those murdered by Franco’s regime stood in silence, fists raised defiantly in the Republican salute as they demanded justice. for their loved ones. 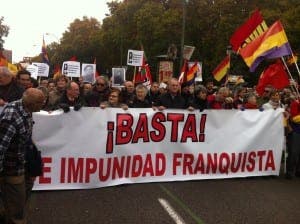 Architect Diego Mendez designed his towering cross to withstand a hurricane. Could the political winds of change eventually tear it down?