Argentine chef Mauricio Giovanni picked up his first Michelin star, one of five won by Marbella restaurants in this year’s guide. The self-taught Giovanni was one of three Malaga chefs recognised by Michelin for the first time. Formerly a law student and a PR agent for a nightclub, Goivanni arrived in Spain 12 years ago. Having already won the Academia Gastronómica de Málaga for the best chef and restaurant in the province, his bold twist on Mediterranean food has been handed the highest honour.

Diego Gallegos came from Brazil and gave up a university law degree to start cooking professionally. A fascination with river-fish and caviar is the dominating theme of Sollo’s menu, which has both 14-dish and 22-dish tasting menus. The Brazilian-born 31-year-old had already been garlanded with the 2015 most ‘revolutionary’ chef at Madrid fusion before Sollo’s rocketing reputation was capped with its first Michelin star.

Luis Olarra hails from the Basque Country and is flying the flag for that region’s proud culinary traditions. The 29-year-old chef is famed for blending Mediterranean and Japanese dishes at Kabuki Raw, with his talent winning the restaurant’s first Michelin star. Dishes such as scallops with Malaga white garlic, which combines dashi broth, kombu seaweed and katsuoboshi with a sweet miso mixture, flaked almonds and garlic confit, are raising Malaga’s gastronomic profile.

The website of Dani Garcia’s two-Michelin-starred Dani Garcia’s Restaurant Group proclaims ‘The democratisation of high cuisine’. And it doesn’t come much higher than Basque cooking legend Martin Berasategui, where Garcia learned his trade before opening his first restaurant in 1998. One of Spain’s best chefs, Garcia captures the traditional flavours of Andalucian cooking. He opened the Dani Garcia Restaurant and BiBo in 2014.

Malagan chef Garcia’s use of produce from the region’s coast is at the heart of his cooking.His restaurant’s dining room tables overlook the yachts and boats moored inside Malaga port. A glass-cubed kitchen restaurant allow diners to enjoy the theatre of a professional kitchen at work. But the real star is Garcia’s brand of Andalucian haute cuisine, which has earned him numerous awards, including Best Andalucian Chef of 2009. 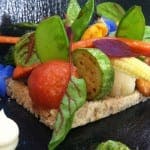 Opened in 2000 in the Elvira Hills, El Lago won its first Michelin Star in 2005. The idyllic location is matched by 40-year-old Ronda-born chef Diego Del Rio’s heavenly food. Del Rio studied at the legendary Cordon Bleu de Paris school before working in Fouquets and the Four Seasons restaurants in the French capital. Del Rio combines high-end cooking with the flavours and recipes he learned from his Pujerra-born mother and grandmother.

Jaume Puigdengolas’s 14-seat restaurant is the smallest restaurant in the world to hold a Michelin star. But what it lacks in size, it makes up for in flavour, sourcing freshest fish from the Mediterranean and the most succulent cuts of meat from Malaga’s mountains. Nestled in Marbella’s Old Town, Skina opened in 2004 before winning its first Michelin star in 2009.. Barcelona-born Puigdengolas learned his craft cooking arond the Basque country and his restaurant serves up Malagan classics such as ajoblanco.