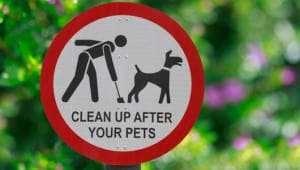 WHEN visiting Jerez one thing that really strikes you is the fantastic street decorations. And, no, I’m not talking about the Christmas paraphernalia.

All along the streets of Jerez you will find wonderful presents left for you by loving, caring dog owners. When their pet performs the owner, out of love of the city, just leaves it behind.

The problem of doggy dumpings has reached near unmanageable proportions. Walking to Torres Blancos in the west of Jerez, or La Merced in the North you will see over 20 dog droppings each way. I know because I counted.

I have now put my bag in one too many doggy doodoos to maintain any form of affection for owners that do not clean up after their dogs. It would be nonsense to blame the dog directly, whom is just answering the call of nature. It is the owners that have caused the issue.

It’s not hard. When your dog performs in the street, pick it up. If some owners can do it, why can’t the rest?

This is not a problem endemic to Jerez.

Poor dog ownership across Andalucía has not gone unnoticed. Having swum with dog poop more than they can bare, the Junta of Andalucía has recently ruled that dogs shall be banned from all beaches of the Costa del Sol from June 1st to September 30th.

But a lifeguard at Sabanillas defiantely responded, “I’ll continue to walk my dogs along this beach in spite of the Junta’s decision.”

Fine. Just make sure that you clean up afterwards.

Other ayuntamientos have similarly got fed up with pirouetting over droppings everyday on their way to work. The streets of Malaga are like a dream come true. The city levied a fine of over 600 euros on the local park-poopers and their owners with fantastic results.

Madrid and Barcelona have enacted a fine of 1,500 euros to combat the unwanted poops.

Similarly, Jerez also suffers from a presence of the aptly named Happy Yapping Club. Some owners have not yet bought the dogs barking under control. It is a natural response to percieved danger, and is perfectly tolerable in low levels. However, when it ranges into the constant and the ridiculous, everyone is going to get annoyed.

I have the good fortune of living next to two lovely dogs, who are self proclaimed members of the Happy Yapping Club. When I first moved in, the two went insane whenever I came up the stairs.

I thought to myself, ‘alright fair enough, I am new. Perhaps they’ll grow accustomed to me.’

Two months down the line the unbearable yapping continues. I now feel like a prisoner of war in my own home. Some days you can’t even move without one of them releasing a shrill croak.

Jerez must take action to save its streets. It is a great shame that dog owners cannot just be trusted to remove dog litter, instead requiring laws to make them keep the streets in order.

For me, my relationship with dogs has been irreparably scarred by the Happy Yapping Club and the infestation of doggy doodoos. I doubt that I will ever be able to look at them the same way again.

Please, pick-up after your dog.

Andalucia gang post cute photos of Pomeranian puppies to scam online buyers out of €30,000 across Spain