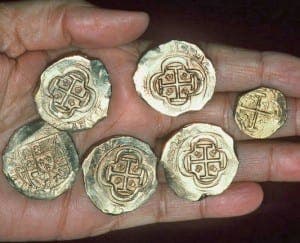 A SUNKEN Spanish galleon discovered off the coast of Colombia may hold the world’s most valuable treasure.

The 300-year-old San Jose is believed to contain 11 million gold coins and jewels worth billions.

The Colombian government announced that underwater vehicles had located the vessel, which went down with 600 crew after trying to outrun a fleet of British warships in 1708.

Spain, the USA and Colombia are locked in a legal battle to determine who owns the rights to the treasure.

Colombian president Juan Manuel Santos admitted it could take years to salvage the ship, which is 700 feet below the surface of the sea.