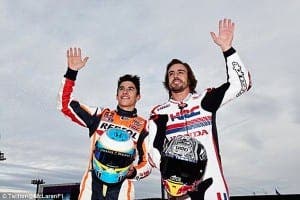 SWAPPING fast cars for fast bikes, Formula One star Fernando Alonso took to the saddle among the world’s fastest men on two wheels.

Attending a MotoGP team Honda post-season celebration, Alonso put his F1 woes behind him after a disastrous 2015 with McLaren-Honda.

But it wasn’t all bikes for Alonso, who also gave Ayrton Senna’s 1991 championship-winning F1 car a spin.