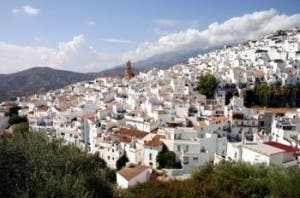 STROLLING through an olive grove surrounded by rolling hills, mountain peaks in the background and the November sun beating down on my back, I was in a state of undeniable bliss as I took in the jaw-dropping landscapes.

David from the Competa tourist office had pointed me in the direction of the olives, a simple five-minute walk from the centre of the pueblo, saying ‘that is where you will find the real Axarquia’.

And off I’d trotted, along a gravel path lined with never-ending rows of olive trees – until that is, I rounded a corner to find myself confronted by a horse. Not being very ‘country’, my path through this rural paradise was blocked.

As I approached (warily), the horse, loosely tied to a tree with a flimsy-looking rope, reared up on its back legs and neighed at me, sending a large amount of saliva in my direction.

Wracking my brain for what to do next, I reverted to what I been taught as a kid growing up in London: if you don’t like the look of someone, cross the road.

And so, after scrambling down a relatively easy slope, I found myself on another path and again heading through a jungle of olive trees.

But to my utter dismay, just five minutes further on, my path was once again blocked by a solid-hoofed mammal determined not to budge.

This time I did not even try to pass. I set my bag down, took out my book and just enjoyed the balmy autumnal day in the great outdoors. It was, as David had promised, a real insight into the laid-back way of life amid the fertile lands of the Axarquia.

And it is this way of life that attracts so many expats to the area, including, no less, than John Noble, the editor of Spain’s celebrated Lonely Planet guide.

A former journalist at the Observer and FT, he fell in love with the place over two decades ago and uses it as his base when not carousing the rest of the country for his job.

On a night out at the town’s stand out hive for fun, restaurant El Pilon, he is quick to sing the town’s praises.

And he is not alone. Danish expat vet Jens Klausen, 79, moved here 25 years ago, and insists he will never move.

“The climate, the extremely friendly people and the beautiful landscape are as good as anywhere in the world. I have no plans to move,” he says.

Nor does Tom Sobel, who owns emblematic Pilon restaurant. The genial American, who divides his time between running the popular spot and working as a therapist along the coast, fell in love with the local art and culture scene. “It is quite different to any other places I have visited and there is usually something going on,” he says.

Back in the white-washed village centre I quickly get a firsthand encounter with the ‘extremely friendly people’.

While perched on a bench in Rincon de los Abuelos (grandparents’ corner), studying my map and planning my route around the village, I was joined by Maria and Carlos, a retired Spanish couple who have lived in Competa for over 40 years.

After exchanging pleasantries and revealing the fact I’m a journalist, the couple were determined to show me all Competa has to offer.

Taking hold of my map they plotted ‘the best route’ for me to take, placing an ‘X’ at every ‘tourist attraction’ they could think of.

But, as Carlos says: “Competa is not really for tourists; you can come for a day but it is better to stay for a lifetime.”

The first port of call, hand-picked by my grandparents-for-a-day, was the Museo del Vino close to the charming main square, Plaza de la Almijara, with its 15th century church and Moorish clock tower.

Even more than for its olives, the Axarquia countryside is renowned for moscatel grapes – and the wine isn’t too bad either. The two local bodegas, Bodega Almijara and Bodega Luis Picante, export their wines  throughout Europe, and tours of both places are well worthwhile.

Each August, revellers gather beneath the lofty bell tower in the plaza for the Noche del Vino.

‘For this one night,’ says my tour guide, ‘wine is free by the barrel’.

“People come out in the thousands, drinking as much as they can take,” he adds. (Needless to say, I’m now planning a return trip to Competa in the summer.)

Next up is a trip to the art museum. Competa’s growing reputation as an arty destination attracts expats from far and wide, many coming for the annual sculptures walk showcasing local artists’ work every Easter.

My final trek of the day takes me a little way up La Maroma. At 2068 metres, La Maroma is the highest mountain peak in the province, forming a natural barrier between Granada and Malaga. Even at 636 metres above sea level the views are impressive.

In one direction I watched the first snow of the season fall on the Sierra Nevada, while in the other, I could see brilliant-white cube houses tumble down the hillside with the Mediterranean glistening far off in the distance – a spectacular end to my day in this rural retreat hidden up in the hills.