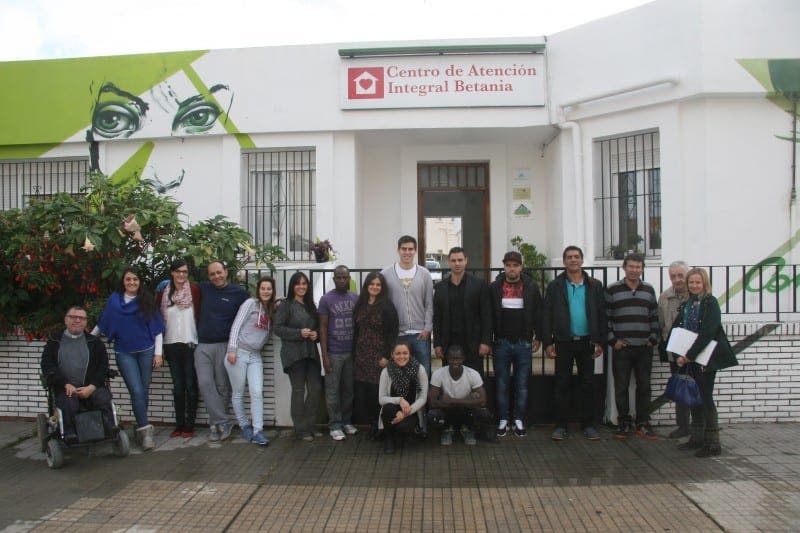 BEGOÑA Arana Alvarez looks drawn, but defiant. The director of La Linea-based homeless and crisis centre Hogar Betania is discussing the mounting problems and heartbreaking decisions her organisation is facing this Christmas.

Hogar Betania’s soup kitchen feeds daily up to 400 people – young families without work, Spaniards, expats, Gibraltarians and refugees –  for nine months a year. But with funding cuts looming for a third consecutive year, they may have to start turning hungry families away.

“It’s very difficult if people are in a queue to come and get food,” she sighs. “How do you say, ‘Stop there. I can’t feed you.’ Here in La Linea, the average monthly income for a family is €400 a month. That’s supporting four or five people.”

La Linea is the poorest town in the poorest province (Cadiz) in Spain, with unemployment among its 63,132 residents running at 46.57%. All the attendant social woes are to be found here.

Hogar Betania’s residents include victims of domestic violence and their children, homeless people and migrants, many trafficked by gangs in Senegal, Nigeria and Ivory Coast before undergoing perilous journeys to Spain.

In the midst of these hardships, the bright graffiti sprayed on the side of Hogar Betania’s main building  glows like a bold statement of intent: ‘ESPERANZA’ (HOPE). And hope is something they cling to here. Because the centre faces an unprecedented crisis.

As well as money, vital refurbishment work is needed.

Volunteers are needed to help paint and refurbish the bedrooms to allow another 34 people to stay at the centre, where there are currently around 30 residents, as well as 10 women and their nine children.

Education classes and workshops are set up to help the unemployed back to work. In fact, this is the only centre in Andalucia to offer food, clothes, accommodation and prepare residents for a better life in society.

Clothes and children’s classes are provided, with a free summer school for children. Last year, they distributed toys to 300 children from deprived backgrounds.

Heading the tireless team is La Linea-born director Begoña. The 30-year-old started working as as a volunteer at Caritas when she was 17 before setting up Hogar Betania in 2012. Her powers of resourcefulness have helped the centre battle through many crises.

“In 2012, the money the church got from the government was stopped so they decided to close the centre,” she says.

“We decided we weren’t going to let people, including children, go back to sleeping on the street.

“So four or five volunteers used our own money to put a roof over the head of 12  people. We all lived together under one roof. We begged and borrowed to get them to let us back in.”

After moving back into the smaller premises, the centre also took charge of a second, larger building in 2012, which was formerly an old people’s home.

“This place was knee deep in rubbish and full of syringes,” says former resident, Ronald Henry Lima, 65. “The ceiling was falling in.”

Painstaking work to rebuild the centre began, and the currently unfinished building now houses 30 mainly male residents with the smaller centre looking after the women and their children.

Begoña tells me this is ‘always full’.

Such selfless devotion to La Linea’s poor and deprived has earned her the 2014 Jovenes Andaluzes de Futuro (Young Andalucians of the Future) award.

In a country where the social security net provides scant protection for the long-term unemployed, such altruistic work is a lantern in the dark.

As well as volunteers, Begoña’s team includes three psychologists, two social workers, a child psychologist and a teacher to help residents, many of whom have undergone horrific ordeals.

“We have women who were trafficked here from Africa. Many of them come over in rubber dinghies you can buy in a supermarket. They fell into the hands of the mafia,” she says.

“They are sexually and violently abused and passed from one hand to the other. They tell them when they get here that they own them. And then they become prostitutes. It’s very, very difficult to get them out of that.”

“We’ve only got one bathroom for the men here, which causes queues and problems,” he says. “We also need to open rooms up so people have somewhere to sleep for the night. Each room costs about €856 to refurbish. We need walls, floors, and windows putting in.

“We have victims of domestic violence, women who have been beaten up by their husbands, people who live in the street or have been living in houses that have been falling down around them. We have people who come over on rafts from Africa who have nowhere to go.”

Manuel and Begoña show me the centre’s garden, which was recently paid for by donations from Sotogrande International School, whose pupils have also been helping out at the centre through their Kindred Project charity.

Vans have been provided by one of the centre’s sponsors, La Caixa bank. Rooms are sponsored by, among others, Estepona Rotary CLub and Bet Victor.

But despite this corporate funding, much of which comes from Gibraltar, the centre faces steep running costs.

Begona estimates they spend around €120,000 a year on food with local families arriving at lunchtime to collect hot meals in tupperware boxes. They take the food home to avoid the stigma of eating at the centre.

Meanwhile, the annual accommodation cost for one resident is €10,800, while medical costs come in at €1,080.

Faced with such huge odds, the tireless Begoña refuses to countenance defeat or the possibility of having to close some of the centre’s facilities.

“I will never let it happen,” she says. “We have a guardian angel looking after us. We always manage to get through the month. But we need help.

“If we don’t get money people will just be on the street and they will go down, down, down.”