THE European Commision has hit out at Spain’s banking sector, suggesting more bailouts may be needed. 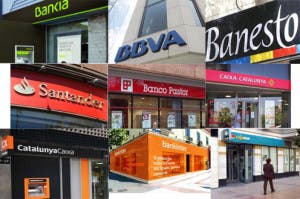 The Rajoy government claims the economy is ‘firing on all cylinders’ and is expected to grow by 3% this year. While Finance Minister Cristobal Montoro has even said Spain’s economy should ‘serve as a shining example to the world’.

However, the EC doesn’t seem quite so impressed.

Pointing towards clausulas suelos (mortgage floor clauses) compensation as a ‘major factor’, an EC report stated Spanish banks’ risk exposure ‘remains inordinately high’, with many caught up in ‘abusive’ mortgage lending at risk of having to pay back millions of euros in compensation.

Alex Trelinski - 24 May, 2022 @ 12:00
GREENPEACE protestors dressed in red jumpsuits staged a protest at the headquarters of the Murcia-based meat production company El Pozo on Tuesday. Around 20 environmentalists...