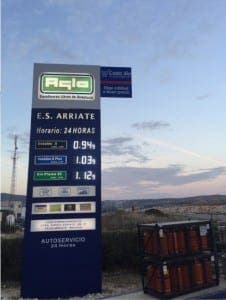 With the average price of diesel costing €0.984 and a litre of unleaded coming in at €1.149 as of December 22, Spain is experiencing its cheapest prices since 2009.

According to an ABC survey, the cheapest leaded petrol in mainland Spain can be had for €0.978 a litre at a Binéfar petrol station in Huesca.

Prices of petrol and unleaded have gone down 6% and 13.5% respectively since last year.

The plummeting prices at the pumps are thanks to the price of Brent Crude oil dropping below $38 a barrel for the first time since 2008.

And they are expected to stay low for decades to come, with OPEC warning oil prices won’t return to last year’s level of $100 until 2040.