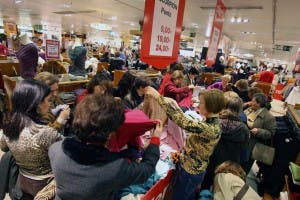 WHILE Brits back in England have been bagging bargains for almost two weeks already, the sales have only just begun in Spain.

January 7 is the first day of Spain’s rebajas, following the Reyes Magos celebrations on January 5 and 6.

While price cuts are expected to be drastic across Spain’s retailers, Corte Ingles in Valladolid has claimed it expects 70,000 visitors in the first day alone.

Although the majority of retailers stuck to this tradition, some opened their doors and dropped their prices on New Year’s Day to ramp up the competition.

The sales are expected to run until the end of March after which point you’ll have to wait until July for the summer sales – or the end of June in Madrid.