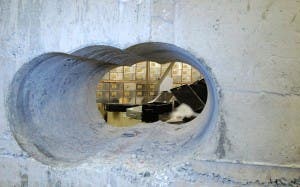 IT was a throwback to the crime’s of last century.

The €31 million Hatton Garden jewellery heist was a ‘last hurrah’ by a gang of ageing crooks with dreams of retiring to the Costa del Sol, it has emerged.

With six members of the gang tracked down and sentenced in the UK, police are now attempting to pin down the one remaining mastermind of the robbery.

Known only as ‘Basil’, the missing member of the gang – which has an average age of 63 – has gone AWOL, with police believing he is hiding out on the Costa del Sol.

However, investigators admit that they know little else about Basil.

The crooks – who were caught after boasting about their heist in a London pub –  drew on experiences from two crimes which several members were involved in: the £26 million Brink’s Mat gold heist and the £6 million Security Express cash robbery.

They enjoyed links to powerful gangsters, from the Kray twins to the violent Adams crime syndicate.

British woman, 80, who lived alone is found dead after being shot three times at Costa Blanca home in Spain