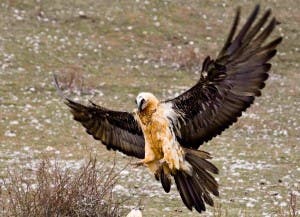 ALMOST 40 bearded vultures have been set free in Andalucia’s sierras since 2006.

The Junta’s environmental office has liberated 37 birds across four Sierras in Granada and Jaen to foster an autonomous and stable population of the species in the area.

For the best chance of survival, birds were encouraged to return to their birthplace to feed and reproduce.

Of the 37 that were liberated from Granada’s Sierra de Castril and Jaen’s Sierras de Cazorla, Segura and Las Villas, 18 are still alive and well.

Ten have died and the whereabouts of the final nine are not known.