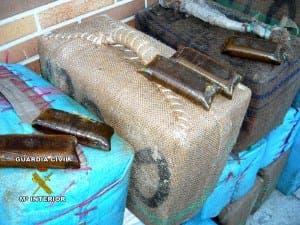 TWO suspected drug smugglers have been arrested after they were allegedly seen dragging bundles of hash from the sea.

Algeciras Guardia Civil detained the men in Tarifa after a special monitoring device to combat drug smuggling was placed on the coast at Punta Paloma.

The two men were allegedly seen opening the bundle and hiding packets of hash in their clothes.