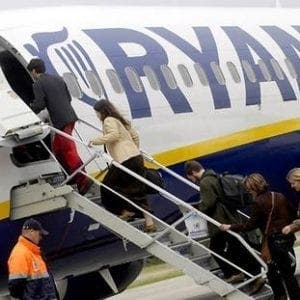 A FURIOUS father of four sent the bailiffs to Ryanair HQ to reclaim €800 from the budget travel firm after he was charged for checking in.

Lucas Marshall, 34, was billed €420 to check in to his family’s flight back from the Canary Islands, because he could not print his boarding passes due to a booking reference problem.

With just minutes before the flight was leaving Fuerteventura, Marshall paid up to get his 42-year-old wife, Michelle, and kids aged four, seven, 13 and 16 home.

Upon his return to the UK, Marshall took Ryanair to court and was eventually awarded €805 compensation, after sending bailiffs to the firm’s HQ to pay up.

“I don’t like getting walked over,” said Mr Marshall.

“To me it was about the principle, they take €420 off you for a piece of paper when everything is already paid for.”