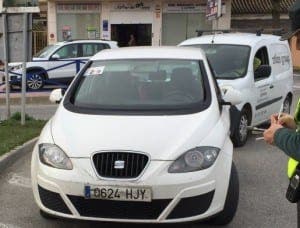 A FURIOUS mother-of-two is in shock after police handed her a €200 fine because they couldn’t read her car number plate.

The Guardia Civil stopped Spaniard Mirian Moreno, 31, at a Sabinillas roundabout and fined her on the spot.

The number plate, seen by the Olive Press, was slightly bent but letters and numbers were identifiable to read 0624 HJY.

“I am absolutely livid,” out-of-pocket Moreno told the Olive Press.

“I will be appealing the fine, as I informed the officer that I had just been driven into and had not yet had the chance to replace the number plate.”

Although it is well-known that in both Spain and the UK it is a legal requirement to have a legible number plate, the question remains as to whether this mother’s car qualified as ‘illegible’.

If you appeal a traffic fine in Spain and lose, you have to pay a bigger fine, so around 1% of Spaniards appeal their penalties, preferring to pay up.

“If you have a vehicle, your plate numbers must be in perfect conditions, it is the law, and in most European countries you must keep your plate number in good condition,” said a representative from traffic website N332.

Jorge Hinojosa - 21 May, 2022 @ 18:00
THE names Hugo and Lucia continue to top the charts as the most popular names for newborns in Spain, according to the latest data...