SPANIARDS may be the first to check out the morning news but they’re among the last people in the world to trust it. 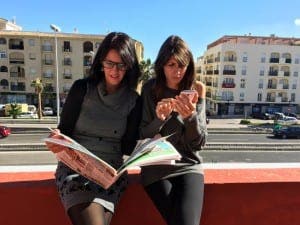 In fact while 85% of the country sucks it up, a meagre 34% actually believe what they are reading, watching or listening to.

The revelation comes from the Reuters Institute for the Study of Journalism in its 2015 report, which looked at the media scene in 12 countries.

Of those dozen, Spain is top for interest in news but beaten only by the USA for lack of trust. Clearly, Spanish media is getting it right commercially but not journalistically.

Of course, that increased interest is largely due to the landmark elections which saw the PP and PSOE waved goodbye to the old two-party system.

The report also confirms what most of us have known for some time: that sales of proper printed newspapers are on a downward spiral worldwide, and Spain is not immune.

Smart phones are largely to blame as audiences guzzle up articles and videos shared through social media without having to hand over one centimo at a news stand.

That said, both continue to attract audiences three times the size of even their most successful online rivals.

The most notable of these, El Confidencial, still had a fantastic year. It is now the most read online-only newspaper in Spain, followed by Publico.es.

El Confidencial’s new-found popularity stems from its investigative and original reporting. In November, one of its journalists worked with The Olive Press on a story about infamous fraudster Nigel Goldman.

Where global publishers are concerned, BBC, CNN and the New York Times are the most widely read in Spain.

Regional newspapers remain ‘moderately healthy’, although many are still way behind in terms of their online presence and reach.

It has long been the golden question in journalism: how does a newspaper make money from its website?

In the UK, only The Times now has a paywall after the Sun recently ditched its own. In Spain, nothing of the sort is yet in place.

El Mundo has flirted with the idea and currently operates a couple of paid subscription services for enriched content and e-paper downloads.

But for the most part, publishers have kept their online content free for all and funded by advertising.

Of course, news is not solely the domain of newspapers. In terms of television audiences, La Sexta showed the biggest increase thanks to its broad range of news and current affairs programmes.

The leading radio network – online and offline – is Cadena SER.

One major change Spain saw in its media scene last year was an increase in news sharing, due to the growth in mobile device usage as well as keen public interest in the volatile political spectrum

Television is the key driver of debate, however, with current affairs programmes widely discussed on Twitter and Facebook.

The Olive Press by numbers

AS newspapers struggle to stay afloat, cutting back on newsdesks and switching to digital, The Olive Press is heading in the other direction.

In 2015 we launched a second edition dedicated to Gibraltar, with 10,000 papers hitting the Rock per fortnight, and continued to expand in every department. Meanwhile, it’s hard to argue with the soaring growth of www.theolivepress.es throughout 2015. And now we have a whole new website to ring in the new year too, in the shape of www.gibraltarolivepress.com.

Keep on moving: Marbella can be a dangerous drive