RECENTLY the second friendly game was played between San Telmo School in Jerez and La Caleta in Cadiz under the watchful eye of Gaelic football professionals. Having heard about the innovative schools project, they had offered to provide some training in preparation for the big game this May. 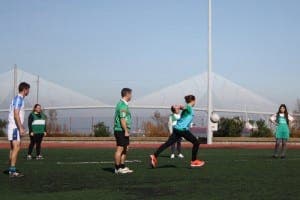 The session was organised by both schools with the clubs providing equipment. The rules were slightly adapted to ensure safety, allowing the game to “flow easily”, mentioned Michael, captain of Team Marbella.

The day began with a hearty breakfast, before mixing both schools 3rd ESO’s into two teams. The azules (blues) and verdes (greens).

Girls were encouraged to play just as much as boys. This is all part of the aims behind the project, to encourage gender equality and the knowledge of a foreign culture.

The Sevilla manager, Kevin, was immediately very impressed by the pupils skill. There are certainly some emerging Gaelic football stars.

This is very encouraging considering the difficult nature of the sport. One of the more unusual rules is that you can only bounce the ball four times before having to do a kick-up. Scoring is also different. You get three points if you put the ball in the goal, and one point if you put the ball above it.

La Caleta has trained its team on the white sandy beaches of Cadiz, whilst San Telmo school utilised its school grounds for the task.

The kids have taken to the sport like wildfire. They have made posters and Powerpoints about this specifically Irish sport. You’ll be hard pressed to find someone in San Telmo who doesn’t know what the phrase ´fútbol gaelico´ means.

“I train at home in the lounge”, mentioned Alberto, a pupil at San Telmo. 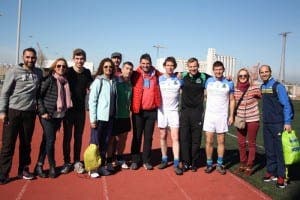 When asked if it is their favourite sport, the response is always a resounding ‘YES!’

The inclusion of Gaelic football in the curriculum is the brain-child of Lydia, an English teacher at San Telmo School for almost seven years. She has worked tirelessly to make the kids time at school as fun and informative as possible.

“We try and give children the best education possible as it might be the only thing they get from life”, she said.

The San Telmo district is one of the most deprived area of Jerez. Introducing them to Gaelic football has been a way to enrich the kids lives and open their minds.

The friendly game was undoubtedly a resounding success that will be talked about for quite some time. The kids are looking forward to seeing their Marbellan and Sevillian friends again at the big match.