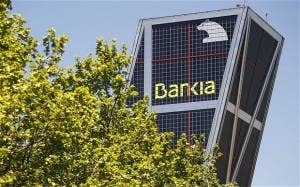 BANKIA has agreed to fully reimburse 200,000 investors who bought €1.8 billion worth of shares before the company’s 2011 public offering.

The state-owned bank are giving the investors three months to claim back their original investment plus 1% interest.

A Bankia spokesman said: “[Investors] will get their funds back in a period of time that we estimate to be no longer than 15 days after the claim is filed.

The decision to repay investors follows January’s landmark decision in favour of two plaintiffs who invested thousands in the bank.

The pair bought €9,997 and €20,868 worth of preferred shares in the bank, which was formed when seven failed caja – or savings – banks merged.

The Supreme Court ruled in the duo’s favour of after stating here were ‘serious inaccuracies’ in Bankia’s stock market launch prospectus.

Former Bankia head Rodrigo Rato is currently the target of several criminal investigations in relation to the case.

Cristina Hodgson - 6 Dec, 2021 @ 08:45
THE director general of the DGT (Spanish Traffic Authority) has launched its annual drink and drug driving campaign. As of today, Monday, December 6, the...