JEREZ is a city with a tangled history. It has been both Muslim and Christian during its 1,000 years of existence. 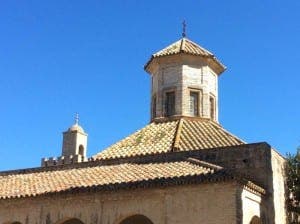 Time has left the city with an array of uniquely jerezano buildings. Modern tower blocks cram in next to an ancient church, as houses rub up against a crumbling Muslim wall. The Christian takeover in Jerez meant that all the mosques in Jerez were destroyed, all except one. It was converted into a chapel. Last week a group of students gave the mosque the respect it deserves, posing important questions about the place of Andaluz heritage today.

When a group of students visited the old mosque they removed their shoes. In this action, they gave the building the respect that it rightfully deserves.

They make a valid point.

This is not insane Crazy Christian Spain, this is not Al-Andalus, this is modern Spain.

Western society teaches respect and acceptance of everyone and everything, regardless of their race, creed or culture.

Unlike their militant Christian predecessors, modern Spain should be able to both accept and celebrate its Islamic heritage.

The last Almohad mosque of Jerez has survived owing to its position and later conversion to a chapel.

It was initially constructed as a private mosque within the walls of the alcazar, to be used by the
Alcazar’s inhabitants only. It’s position was its saving grace. The medieval bulldozers passed over it, without realising its existence.

The Holy building then received the addition of a rather shoddy altar, decorated with two poems by Alfonso X. The structure is small and rammed somewhat haphazardly onto one side of the building.

The rest of the building maintains its original Islamic charm.

The entrance is still dominated by a courtyard with a fountain for cleansing. An essential aspect to any mosque. Before prayer, Islam teaches that everyone must wash themselves so as to be clean before God. Moving within the central edifice of the ‘chapel’ maintains the appearance of an Islamic prayer room. It’s wall still holds the all-important niche indicating the direction towards Mecca.

It is clear that the old mosque is still perfectly capable of executing it’s former Muslim function.

Why shouldn’t it be reinstated?

Opening this argument up risks a rather Pandora’s Box affair, with people beginning to claim land and religious buildings that have been firmly Spanish since 1264.

Many of Christian Spain’s Holy Buildings rest on the sites of old mosques. La Catedral de Sevilla, for example, is directly above the foundations of its Islamic predecessor. The surviving courtyard and minaret attached to the new cathedral, attest to the religious sites Islamic origins.

Allowing the Alcazari mosque to be reinstated could spell trouble for this cathedral, and many other famous holy buildings in Spain. If one chapel is converted back into a mosque, it would become possible for other Holy buildings to also be returned to their former masters.

Similarly, it could open-up forgotten wounds and anger the Islamic community. ISIS, with its continual spiel of nonsense, is determined to remember Andalucia’s Islamic heritage. They have published several videos online threatening to retake it for the ‘Caliphate.’

Absolute rubbish and total scaremongering, but it raises an important point. Lenience towards former Islamic sites could attract unwanted attention. Spain has so far largely escaped the terrorism plague, but making a fuss about their Islamic heritage could change this.

Flipping the coin, to give the old mosque back to Jerez’s Muslim community could be a good thing. In respecting their culture, the Ayuntamiento de Jerez would demonstrate its commitment to western values and desire to celebrate all its culture.

Reinstating the Alcazari mosque would undoubtedly be good for tourism. There is nothing more exciting than removing your shoes before visiting a building.

It would certainly get tongues wagging.

What should Jerez do? Are we too far down the road of islamophobia to respect Jerez’s heritage? Or, is it simply too late to do anything about it?

I’d love to know what you think. Please comment below.

Huelva home to the best-preserved rural mosque in Spain