The PSOE secretary general secured 130 votes with 219 voting against and one abstention.

Sanchez has another chance tomorrow to be voted in as Spain’s new leader or the country will go to the polls again in June.

“As a citizen and a mayor I don’t think it is good that we are without a government,” said Carmena

“The worst thing that could happen is that there are new elections.”

Podemos’s Pablo Iglesias claimed Sanchez wants ‘to consolidate the main policies of the PP’ before appearing to offer an olive branch to the PSOE, urging the party to ‘write the future of Spain together with us’

The PP and Podemos will call Sanchez after tomorrow’s vote in a last-ditch attempt to from a coalition and avoid new elections. 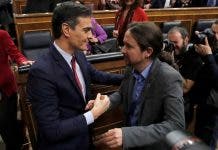