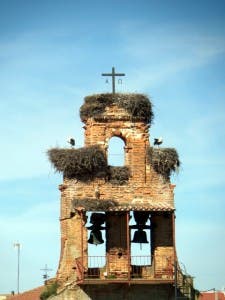 AN army of storks has moved into churches across Castilla y Leon, to the frustration of bishops and choirboys alike.

Now church bosses have appealed to the government to bend environmental laws in order for some 50 nests to be removed from a number of churches.

They insist that the birds are damaging the structure of church spires and roofs.

However laws prevent anyone from tampering with stork nests with only 300 allowed to have been taken down a year for safety risks.

There are an estimated 12,000 stork couples currently living in Spain.