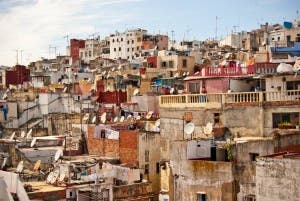 I’VE a soft spot for Tangier.

It was an international zone awash with spies in the Second World War, and only incorporated into Morocco after its independence from France in 1956.

Even today, it retains a faint air of mystery and intrigue.

Small and intimate, I’ve always thought it would have made a more plausible setting for Bogart and Bergman than ‘Casablanca’.

The atmosphere is pure Agatha Christie, plus a hint of the drug-addled exploits of William Burroughs.

The 14th-century Syrian traveller Abu aI-Fida wrote that Tangier was famous for three things – its grapes, its pears and the brainlessness of its inhabitants.

Another, from the nearby Moroccan town of Sabtah explained it thus “Outside Tangier is a spring called Barqal.

Its water is said to cause stupidity.

They diagnose their imbeciles by saying “It’s not their fault.

They’ve drunk the water of Barqal”

On previous trips I’ve been careful to mix the tap water with scotch and suffered no ill effects that I am aware of – although anyone who has been around me when I drink scotch may beg to differ. I blame it on my Glaswegian roots…

But Tangier is certainly a weekend kind of place, and to a European used to the laid-back atmosphere of Tarifa, the constant hassle (plus the aforementioned idiocy) can soon leave you screaming something along the lines of “I’m a Marbella celebrity. Get me out of here!”

Medieval Arab geographers believed that the remains of an ancient bridge lie beneath the waves between the two continents, and that it would be revealed again at the end of time. Unfortunately I couldn’t wait that long so grabbed the fast ferry from Tarifa. (Incidentally, I have my own theory about the passage of time in Marbella. Every day is Christmas, every night is New Years Eve, and every morning after feels like the End of the World).

Driving in Tangier is not for the faint of heart and the infamous Gumball Rally boys added even more chaos to the roads when they roared through on their way to Marrakech. At the reception the night before, I asked the tall, blond, Danish driver who was leading the race if he had any apprehensions about driving through Tangier. “Not at all,” he replied, “In fact, I have Moroccan blood, you know?”

“Yes. It’s all over the front of my Porsche!”

But the best phrase describing Tangier belongs to an Aussie mate of mine, Spud. (Crazy Name, Crazy Guy) who said, “ I passed through Tangier like a dose of salts, literally”

Of course, if plans currently on the drawing board come to fruition, then getting out of Africa will be a breeze. I refer, of course, to the proposed undersea tunnel linking Africa to Europe. Just think of it – Moroccan and Andalucian design and construction expertise, working together on a project that spans two constantly-shifting continental plates.

If you’re the first car through, though, take my advice – pack your scuba gear.

ON a second visit to Spain’s unspoilt Costa de la Luz, Jo Chipchase was finally switched on to its beautiful beaches and illuminated villages…...