Despite being credited as one of the first soldiers to enter the hellish Nazi camp, he turned to a life of crooked schemes, perhaps traumatised by what he had seen.

Basing himself in Marbella, he ran a string of dodgy investment companies, which left hundreds of victims around the world.

In later life, his ill-gotten gains even afforded him a £3 million luxury apartment – with its own hot tub and jacuzzi – on the exclusive cruise liner The World, which circumnavigates the globe.

He lived on the ship for six years, enjoying spectacular view from his own private balcony.

“And for that there is absolute comfort; no housekeeping problems; no staff problems, the staff here are wonderful,” he explained.

Sadly though he had accrued these incredible riches, via a range of investor scams, which were slammed by financial watchdogs in Britain, Ireland, Slovenia, New Zealand and Hong Kong.

One of his schemes offered investors a yield of 12% with no annual charges and ‘instant access to their money whenever they needed it’.

Operating without any sort of licence, Berney claimed to have been investing in FTSE options since 1985.

“The results have been very profitable. Over the years from 1985 until now, he has made an average return of 38% a year,” a statement from his company claimed.

An advert placed in newspapers by Marbella firm Sensible Options asked people to invest in a British Government bond that would provide a ‘regular monthly income of 12% a year’.

But no such bond existed and hoodwinked investors were directed to place £20,000 in Gibraltar firm Rock Financial Services or £40,000 with London broker Man Direct.

Bets on the FTSE’s movements would then be placed by a South American-based firm also registered under Berney’s name.

The Supreme Court of Gibraltar ordered directors from Rock Financial Services to pay back £6,269,111.83 in order to compensate its investors.

The UK’s own FSA later ruled: 2Sensible Options is not authorised by the FSA to do business in the UK, and is not connected with the British Government.”

In 1998, Berney used a similar ruse while operating out of Dublin and offering investors an 18% return, a claim the Irish Central Bank described as ‘unlawful’.

“He was a villain,” businessman Klein, who is now officially retired, told the Olive Press. “He used to always have front men but he was the man behind it.

“There were various false companies set up offshore. Behind it all was Leonard. We could never reach the man. He ran some very big operations.”

One anonymous victim of Berney’s blasted his ‘complete dishonesty’.

“I was a member of a group of investors that not only lost all capital invested in Berney’s program, but had to put up additional capital to meet the margin call of the broker through which he traded our funds,” said the victim.

Another person who was conned wrote: “He is a thief in the sense that he lies in his marketing materials and knows full well that if an investor stays with the program he/she will lose all in the end.”

He revealed Berney had initially made a fortune after selling his ‘absolutely huge’ UK clothing factory, which was one of Marks & Spencer biggest suppliers, to a Japanese firm in the 1980s.

Linn admitted Berney received ‘a lot of negative criticism’ from his business practices, but was adamant ‘he was never accused of fraud or financial misappropriation’.

“He lived a life of luxury and his favorite thing in life was oysters and champagne,” Linn revealed to the Olive Press.

“The first time his cruise liner The World came into Marbella he invited all the Marbella Business Institute (MBI) aboard and paid for 60 people to eat caviar and drink champagne.

“He was a real bon viveur. If I went out for a meal with him, he would always pay the bill. Apart from his gastronomic excesses, his last car was a Bentley and he was a bit of a ladies men.”

Berney’s son John Wood, 56, from East Grinstead, West Sussex, defended his father, saying: “My father ran a series of high-risk investment schemes, and because they were ‘high risk’ that was the nature of the beast.

“Dad was both ethical and above board, but when someone loses money they obviously become upset. I still maintain much of what he was involved in was an incredibly successful investment scheme which made him and many other people a lot of money.”

Kristina Szekely, a well known local real estate agent, revealed to the Olive Press that Berney bought apartments in Spain and rented them out while enjoying the high life on The World. 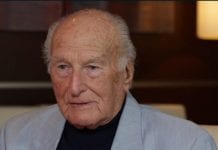