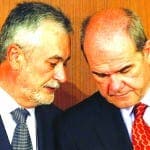 EX-JUNTA chiefs Manuel Chaves and Jose Antonio Griñan are being grilled over their links to corruption this week.

Despite attempts to postpone the start of the hearing, Madrid’s Supreme Court is finally probing their exact involvement in the so-called ERE scandal.

Both men are suspected of being involved in the multi-million euro bogus employment scam, the biggest public money scandal in Spain’s history.

The money, which came from Brussels and Madrid, was first used to create bogus companies, which would later lay off the fictitious staff in a so-called ERE.

Under the scheme millions in redundancy payments were syphoned into a ‘reptile fund’ which was used by senior Junta executives and their families.

Chaves, 71, who led Andalucia for 19 years, previously told the court he had no idea that his Employment Ministry was syphoning tens of millions every year.

However, a damning 129-page report from Judge Alberto Jorge Barreiro states there is substantial evidence that both he and Grinan, his successor, were involved.

Former Employment minister Jose Antonio Viera Chacón will also take the stand with many more senior Junta politicians – past and present – set to stand trial in the coming month.