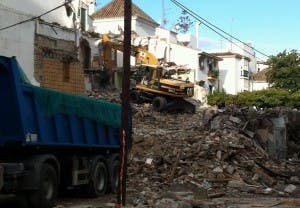 A STRING of buildings have been torn down in the historic centre of Estepona, to make way for an underground car park and a brand new hotel.

Major regeneration of the Old Town has been put into motion as the town hall continues its plans to boost tourism.

Two cafes and a number of small shops have been torn down off of the quaint Plaza de las Flores to make way for a 740 m2 hotel.

The 42-bedroom Maravilla Palace cost private investors €10 million and will be the first 4-star hotel to be built in the Old Town.

It brings the number of hotel beds in Estepona to over 3,000.

Meanwhile, a €1.2 million underground car park is being installed at the Plaza Antonio Gerrero (AKA Plaza del Huevo), which has seen the iconic egg-shaped bandstand demolished. 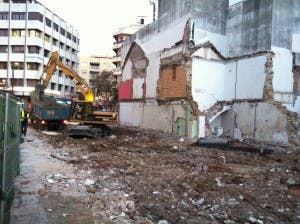 Spread over three floors, it will be Estepona’s first reduced-price public car park, with a fee of just €1 per day.

Disruption to electricity and water supplies in nearby houses has been intermittent since work began on the 100-vehicle capacity car park last month.

And the regeneration is not limited to the Old Town.

Estepona Town Hall has also recently sold a €25 million plot by the marina to representatives of two companies, one being an American consortium.

The plans show five buildings of eight stories are set to go up, each with the possibility of underground parking and a penthouse on top. In total, they will comprise 890 residential units.