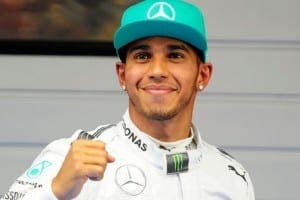 FORMULA One’s biggest celebrity was in Spain this week.

Triple F1 world champion Lewis Hamilton and the Mercedes team were in Barcelona in February to test-drive their cars for the new season.

“It’s been an incredible week of testing for us because we’ve done more mileage than ever before, and the car looks fantastic,” said Hamilton.

Testing used to take place in Jerez but it was moved to the circuit de Catalunya, Barcelona for climate reasons.