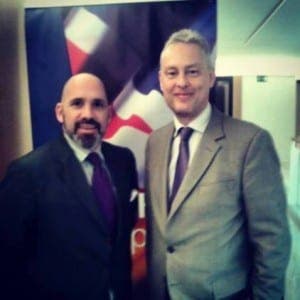 WITH Brexit fever sweeping the UK, the Foreign Office decided to dispatch Britain’s Ambassador to Spain, the always-engaging Simon Manley, to the British Consulate in Malaga.

Ambassador Manley was on a mission to ensure that all expats who are entitled get to vote in what he called a once-in-a-generation opportunity.

As befitting such a momentous event, the mandarins at the Foreign Office decided to invite a carefully-selected band of distinguished members of the Press for an informal, yet vitally important briefing.

Somehow, an invitation to the above event dropped through my email letterbox and landed on the virtual doormat.

(As an aside, did you know that the French for kitten is ‘Chaton´? As in ‘The cat chaton the mat’…)

Obviously the Foreign Office wasn’t aware that my journalistic and broadcasting credentials aren’t the most traditional when it comes to interviewing ambassadors.

Up until last year I had a regular Saturday Night Rock show, and previous interview subjects have included 80s Page Three goddess Samantha Fox (who didn’t know what silicone was) and bad boy actors Danny Dyer and Tamer Hassan (which ended in a looooong night out and a firm friendship.

Tattoos were mentioned at one stage, but it was all a bit blurry).

But an invitation is an invitation, so I threw off the Van Halen T shirt, threw on a suit and headed across to Malaga. Plus, as it was an Ambassadorial event, I reasoned that there might be a Ferrero Rocher or two on offer.

I haven’t been to Malaga for a while, and made the fatal mistake of missing my turn to the Consulate.

The city’s fiendish one-way system finally spat me out by the semi-Guggenheimesque conference centre and it took half and hour of frantic rat runs and back-street driving (and in my seven seater 4×4 nicknamed ´The Tank´, that’s not for the faint hearted) to get back to my original destination.

Ambassador Manley was unruffled by my late and somewhat frazzled appearance, as you would expect from Our Man in Madrid, and seamlessly explained what the Foreign Office was advising (In a nutshell, go online ASAP and register).

He even managed to bat away my ludicrous suggestion that British aircraft carriers might moor off the coast to evacuate expats if Britain voted to leave the EU.

“I don’t think our aircraft carriers would be ready in time” he replied, with a slightly weary smile.

Briefing over, Ambassador Manley headed to catch the AVE back to Madrid (and probably more serious questions than mine).

While I took the opportunity to use all the journalistic skills that I have honed over 25 years of living in Marbella.

Within minutes I was getting stuck in to the Ambassadorial buffet table.

Alas, no Ferrero Rocher chocolates were on offer…