DIPPING into the pages of Laura Cumming’s magisterial The Vanishing Man: In Pursuit of Velazquez brings back warm memories of Mr Moretta, my old English teacher.

For three hours a week, he took a group of distracted teenagers and opened up our young minds to great works of literature, revealing the magical intricacies of Joyce, Shakespeare and Chaucer.

I have been to the Prado and seen Velazquez’s masterpiece, Las Meninas. It was hugely impressive, even to a non-arty type like me.

But after reading Guardian art critic Cumming’s book, I wanted to linger and appreciate its mastery.  While reading The Vanishing Man, you will find yourself constantly flicking to the photographs in the book to admire the reflection from a brass bowl,a dwarf’s facial expression or a maid servant’s swollen eyelids, from being harried in her work.

Details lost to the casual observer are summoned by Cumming’s shimmering prose and expert eye.
But underlying this homage to Velazquez’s mastery is a riveting tale of a humble 19th-century art lover from Reading.
While researching in a library one afternoon, Cumming stumbled upon the astonishing story of John Snare, a bookseller whose world was transformed when he chanced upon a portrait at an auction on sale for £8 which he was convinced was a Velazquez.
Standing down the dissenting voices of art critics, the bookseller embarked on an exhaustive quest to nail the painting’s provenance, a path  strewn with setbacks and tribulations on the way to vindication.

An Edinburgh court case brings matters to a nerve-shredding head as the reader is plunged into a good old-fashioned thriller.
Cumming’s detective work is every bit as impressive as her subject’s.

Following her acute journalistic instincts, she embarks on a labyrinthine journey of her own, knitting together Snare’s journey by sifting through Victorian pamphlets, journals and newspapers. 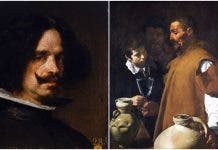 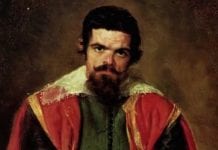 REVEALED: New painting by Spain’s Velazquez unearthed after previously being attributed to his son-in-law