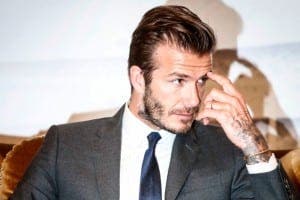 THE past two decades have seen the rise and fall of the metrosexual.

“So what modern-day woman doesn’t appreciate a man who works out, can prepare rack of lamb, doesn’t mind shopping with you on a Saturday afternoon while the match is on, exhibits fashion sense and trims his nose hairs? I want a metrosexual!” I hear you shriek.

But you’d be behind the times.

The world has moved on from the metrosexual’s heady heyday of the mid-Nineties and I’d like to be the first to introduce you to the backlash. Ladies, meet the neo-neanderthal.

He certainly didn’t need a four-bladed bit of technological tosh in luminous green with an inbuilt MP3 player and Sat Nav system.

After his expert shave, he would slap on an old-fashioned aftershave that probably defies the modern moratorium on chemical weapons.

When his eyes had stopped streaming, he would apply Brylcream to his hair and this certainly made him attractive to the ladies. I’m second generation living proof.

As for other aspects of male grooming, stay well clear of waxing.

Only Premiership footballers and cyclists have themselves waxed (and the cyclists are too out-of-it on performance-enhancing drugs to feel anything anyway).

He needs one suit (for weddings, funerals, interviews and court appearances) three pairs of shoes (black, brown and trainers for the weekend) five shirts (for the working week, white or blue) and his weekend outfit.

During my long and distinguished journalistic career I have had the opportunity to attend dozens of launches, openings, exhibitions and conferences and normally grade them on the type of freebie handed out.

More than anything else, however, clothing is always warmly welcomed and I’ve collected baseball caps, T-shirts and rugby shirts by the sack-load, causing someone to ask me if I was sponsored. By a pub chain.

Food and drink play an important part in both the metrosexual and the neo-neanderthal’s life. But while the metrosexual is more concerned with creating the perfect cocktail and slicing his own sushi in the comfort of his designer apartment, the neo-neanderthal views food and drink as a social activity with others, preferably during a sporting event.

As every good host will tell you, the most important aspect to hosting a dinner party is the guests, and the neo-neanderthal does this by getting the boys around for a few beers and takeaway pizza while watching the match.

Due to this, the most important items of furniture in the living room – apart from a really BIG television – are a sofa that can seat four and a coffee table that can bear the weight of four pairs of trainers, 20 or so beers and a selection of Italian/Indian takeaway containers.

There is only one style of music for the neo-neanderthal – LOUD.

It’s not all macho music stuff, however, this He-man’s quite content to watch any DVD featuring Beyonce, Rihanna and Shakira.

So ladies, look out for your nearest neo-Neanderthal.

And don’t be afraid that he won’t appreciate you. Because, as James Brown (no relation, by the way) once sang:

But it wouldn’t be nothing, nothing

Without a woman or a girl.”

Taking a break: Staying in Marbella beats flying to the Maldives, sort of

As seen on TV: Giles revels in his newfound celebrity status after stint on Marbella exposé