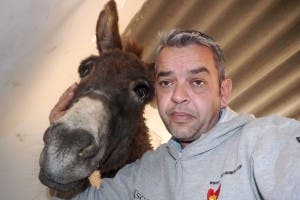 AN EXPAT sanctuary owner who rescued a dying donkey was arrested and forced to purchase it, as well as three others.

Peter Singh, 46, discovered one-eyed pregnant Ethel, who was covered in scars, starving and struggling to stand.

Peter was taking the mule to his Alicante sanctuary when police made their arrest.

The man who had left Ethel crippled with an injured hoof and with her bridle cutting into her face had sent his nephew to the police with two more donkeys.

Unless Peter paid £1,600 for all the donkeys, including the unborn foal, he was told he would be charged with theft.

“My blood was boiling,” he said, “I had no option but to pay up. These people had neglected this poor animal so badly it was close to death.”

“It was as if I was rewading cruelty,” he added.

The police reportedly said to Peter, who opened his sanctuary in Pinoso after quitting his job as a London photographer in Peckham: “Why don’t you go back and save animals in England?”

The brother of the donkeys’ owner, Alonso, said: “It was the English that proposed the deal through the police, not the other way around.

“These donkeys are well cared for.”