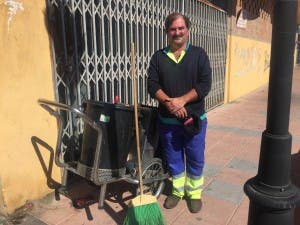 A ROAD-sweeper training to be a lawyer also has his sights set on becoming his town’s mayor.

Multi-lingual Paco Rodriguez Sendra – who has been sweeping the streets of Manilva for seven years – is set to graduate from Cadiz University in July.

The 55-year-old, who is also a qualified priest, is first hoping to get a full time post at law firm Savier Avila, in Algeciras, before going into politics.

Currently undertaking work experience at the firm, he had to reign in his hopes and get a job as a road sweeper when the recession kicked in.

“It was the best way to make money when the recession started seven years ago,” he told the Olive Press. “It’s a decent, stable job and it pays the rent.”

The Pastor at the Church of England’s Christian Brethren Assembly, in Algeciras, added that it had helped to pay his way through his seven-year degree.

The Spaniard, who is a chessmaster and speaks English, Portuguese and French says he now wants to become a lawyer or politician to help people.

“I want to help the local expat communities, the British, South American and French communities… anyone I can help!”

When asked if he will run for Mayor he laughed: “Well I know the Mayor well so that could be awkward, but yes maybe in five or so years if there was that opportunity, I would love that!”