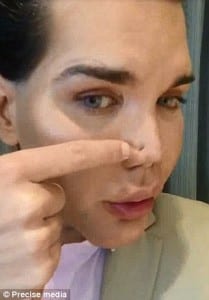 A SURGERY addict who has spent £305,000 to look like Barbie’s Ken had to be operated on in Malaga after his new nose grew a hole.

Rodrigo Alves, 32, who has a home in Puerto Banus, had an operation on his nose in February but his body rejected it.

His septum became loose and a hole appeared on the outside of his right nostril.

“A horrible hole has appeared in my nostril and the infection is eating my nose and I’ve been warned if it is not stopped it could eat into my face,” he said on Instagram.

As the hole grew, the Brazilian found it hard to breathe.

He was admitted to hospital where he received antibiotics through an IV drip.

His nose had developed necrosis, a complication of cosmetic surgery where a loss of blood supply causes the new flesh to die. 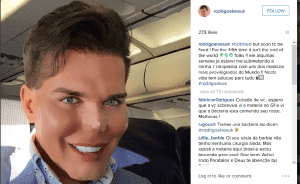 If not treated effectively it can lead to blood poisoning and gangrene, and eat into the surrounding skin.

Doctors in Malaga were able to save his nose and after flying to London to see his GP, Rodrigo returned to his home in Marbella.

The air steward began his transformation in 2004 after struggling with the way he looked since childhood.

In the past year alone he has spent an incredible £95,000 on 20 surgeries, travelling to clinics from Iran to Beverly Hills in the Unites States.

Spain’s health tourism is worth estimated €500m and is growing.

Brit’s looking for a nip and tuck can take advantage of the 60% drop in procedure price and 15% extra spending power thanks to exchange rates.