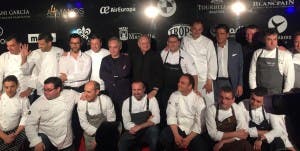 WITH an incredible 71 Michelin stars together under one roof, the A Cuatro Manos opening night wasn’t going to be anything less than fabulous.

Guests that included the Mayor of Marbella Jose Bernal were treated to rounds of curious cocktails while the world-famous chefs mingled with the crowds.

Superstar Daniel Humm, whose Eleven Madison Park restaurant in New York is rated number five in the world, told the Olive Press: “If you want to be relevant today in food you have to experience Spain, Spain is so important to gastronomy today.”

On the legendary Joel Robuchon, who was in attendance, Humm added: “There are only a few chefs in history who have really made such an impact and Robuchon is definitely one of them.”

The opening night saw the chefs prepare a menu of 20 of the French maestro’s most iconic dishes at Puente Romano resort’s Dani Garcia restaurant.

John Thomson, food and drink manager for the Puente Romano group said: “It is incredible, this is the most amount of Michelin stars that have ever been under one roof in Spain, and possibly in Europe! It’s pretty unprecedented and the event seems to be growing each year.”

The four-day event ends on Thursday, with each day throwing up different challenges and exhibitions from the host of international chefs.

Olive Press editor Jon Clarke met and interviewed many of the leading culinary lights, including his ‘food hero’ Ferran Adria, man of the moment Joel Robuchon and Humm himself, who invited him to review his New York restaurant when possible (ED: Unlikely any time soon, sadly).

Look out for the feature in next week’s edition of the Olive Press.

Kimberley Mannion - 25 Jun, 2022 @ 09:00
SPAIN’s first electric plane has made its inaugural flight after taking off from Sabadell Airport, near Barcelona on the morning of Wednesday, June 22. The...