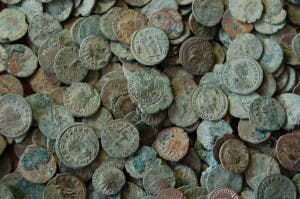 MORE than 600kg of Roman coins worth at least ‘several million euros’ have been unearthed in Sevilla.

The haul was discovered during routine building works close to Zaudin Park in Tomares, and feature emperors Maximian and Constantine on one side and roman allegories on the other.

They are thought to have been payments destined for the army or civil servants and date back to the late third and early fourth centuries.

Researchers believe they did not make it into circulation owing to the lack of wear and tear.

Building has been suspended so the site can can excavated.