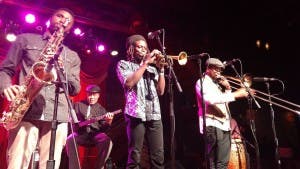 AS if there wasn’t enough great live music available this summer, the town of Coin is jumping on the bandwagon with its own Coincierto Festival.

At a time when the UK has begun to suffer from ‘festival fatigue’ with a number of events cancelled in recent years, Spain seems to have taken up the baton with a relay of new events this year.
Coin’s new one-day festival of live music and art on Saturday May 21 features a great lineup of bands, with headliners The Skatalites returning to southern Spain following their sell-out gig in Benalmadena last year.


The ska band from Jamaica enjoyed their first wave of fame between 1963 and 1965, recording many of their best known songs during this period, including Guns of Navarone. They also played on records by Prince Buster and backed many other Jamaican recording artists of the time. They reformed in 1983 and have played together ever since.

There is also music and entertainment specifically for kids, along with a craft market and displays of street art.


Entry is free except for the Main Stage headline acts, for which the first 300 tickets will go on sale for just €10 each, after which they cost €12 until May 20 and €17 on the day, available online from www.tiquetin.com