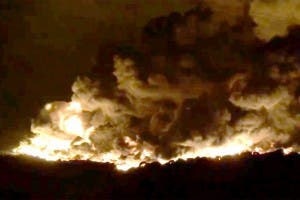 MADRID´S ´tyre graveyard´ is in flames after a suspected arson attack in the early hours of Friday Morning.

The fire, which broke out around 2am, is now sending out toxic fumes and smoke to the surrounding areas of Sesena.

Firefighters are struggling to control the blaze, and at least 20 percent of the tyres have been consumed so far.

A total of ten fire crews and two helicopters have been called to the scene but the dense smoke is making controlling the fire more difficult. 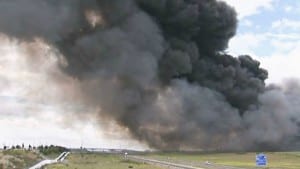 The 117,000sqm dumping site contains hundreds of thousands of old tyres, and violates environmental standards, particularly due to its proximity to a housing development.

The fire comes after the sites owner was sent to prison for ecological crimes in 2009 and after the administrating company Dislift SA has been fined several times.

Calls to deal with the area were never met with action from the authorities.

All schools in the area have been closed, while those with breathing issues have been told to remain indoors.

John Culatto - 27 Jan, 2023 @ 16:37
THE man arrested by authorities in Algericas for the attacks that killed one person and injured several more first landed in Gibraltar on a...