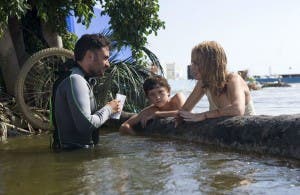 MOVIEMAKERS are reeling from news that Spain’s biggest film studios is to be canned.

The Alicante complex where tsunami blockbuster The Impossible was shot has failed to sell at the asking price and is destined for liquidation.

Just one bid, rumoured in the Spanish media to have come from a Francis Ford Coppola associate, was placed in the second auction for Ciudad de la Luz but the offer failed to reach minimum price.

Valencia’s regional PP government has poured a staggering €500 million of public money into the ‘deserted’ state-of-the-art studios since 2000 and will only have made €94 million back.

The complex, once described by Ridley Scott as ‘the best facilities in the world’, is a victim of geography – miles from Spain’s film industry capitals of Madrid and Barcelona – and financial cuts.

The studios began to struggle after European authorities ruled that regional government subsidies were ‘unfair competition’.

And after the single bid in this second auction from Cine Space N failed to reach the €47 million minimum price requirement, the studios will now be dissolved.